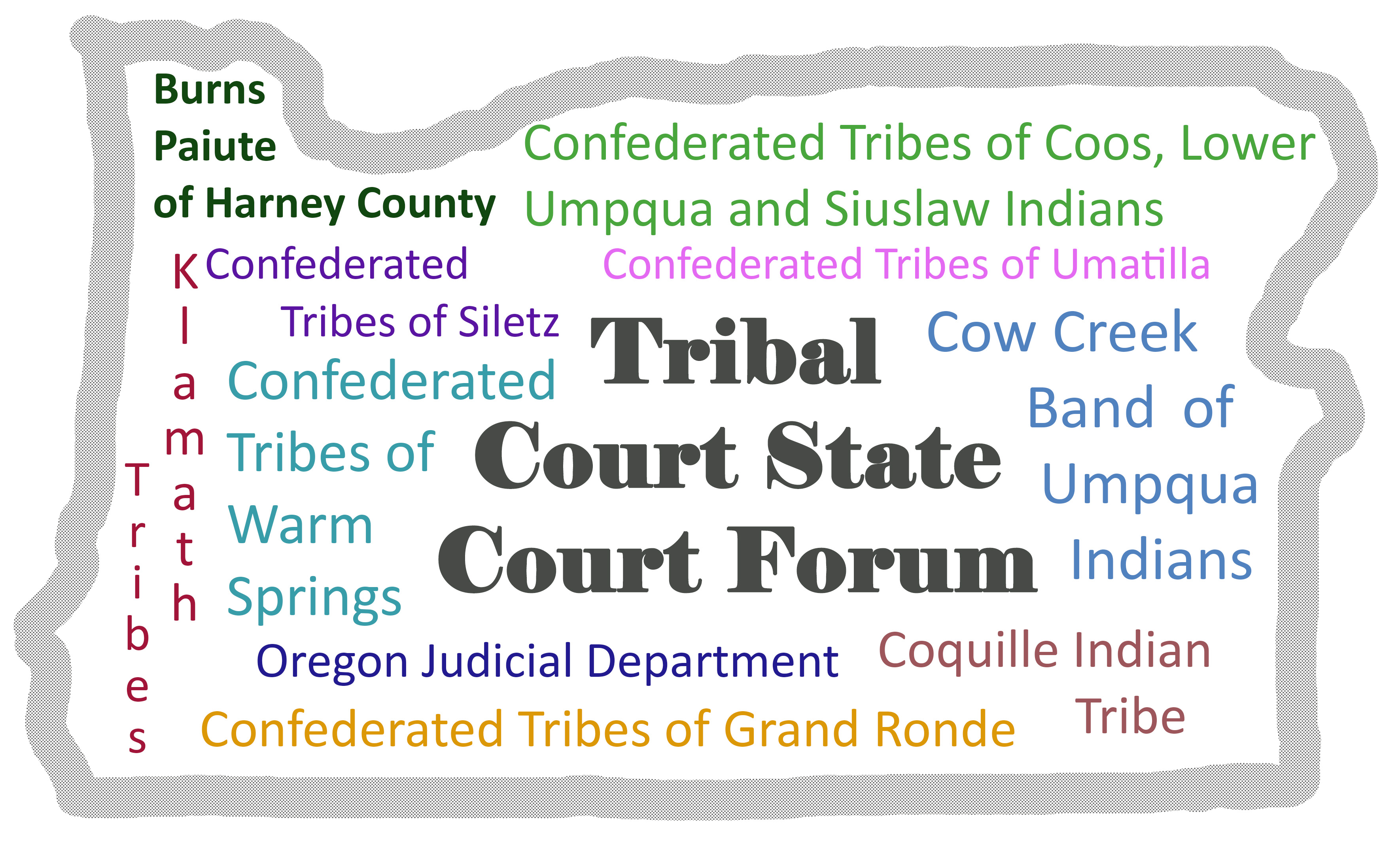 The 9 Federally Recognized Tribes and the Oregon Judicial Department

In honor of Native American Heritage Month, we took a look at the Tribal Court State Court Forum, one of the ways Oregon's tribal courts and the Oregon Judicial Department (OJD) work together to improve the lives of Oregonians and tribal members.

In 2001, Oregon enacted the first government-to-government relations law between tribal and state governments.

Oregon’s government-to-government relations law began with an executive order from Governor Kitzhaber in 1996. The order acknowledged tribal sovereignty and created a system for state agencies and tribal governments to "resolving potential conflicts, maximize key inter-governmental relations and enhance an exchange of ideas and resources for the greater good of all of Oregon’s citizens, whether tribal members or not."

The order created a working relationship between Oregon’s 9 federally recognized tribes and the state –state and tribal governments taught each other about their goals, interests, culture, and history.

As Kitzhaber prepared to leave office, legislators and tribal leaders alike hoped to put the executive order into law to ensure communication would continue. The bill passed with the support of all 9 tribes and the governor signed it into law on May 24th, 2001. Today, state agencies consult tribes on shared concerns – like the environment, education, and land use.

While the governor requires state agencies to consult with tribes, the Oregon Judicial Department is a separate branch of government and under the direction of the chief justice rather than the governor.

In 2015, a group of tribal judges and state judges met and – inspired by other states’ work – considered creating a tribal court state court forum. As a result of their efforts, the Tribal Court State Court Forum met for the first time in 2016.

One of the first issues that the Tribal Court State Court Forum discussed was reducing the fees tribal court attorneys faced in child custody cases, such as juvenile dependency. Oregon, like most states, charges out-of-state attorneys a fee for practicing in Oregon. Oregon also requires that out-of-state attorneys associate with an Oregon attorney.

From the mid-twentieth century until the 1970s, the United States routinely separated Native American children from their families, destroying the children’s connection to their tribe and that tribe’s culture – a form of cultural genocide. In 1978, Congress passed the Indian Child Welfare Act (ICWA), which gives tribes a voice in tribal children’s custody cases.

But the fees charged to out-of-state attorneys make using that voice expensive, particularly since tribal court attorneys usually work in multiple states. The cost adds up quickly. To solve this problem, the Tribal Court State Court Forum proposed an amendment to the Uniform Trial Court Rules. As a result, tribal court attorneys are exempt from the fee and the requirement that they associate with an Oregon attorney in ICWA cases. The amendment to the Unified Trial Court Rule 3.170 passed in 2017.

Native American women "experience higher rates of violence" than the general population, and the attackers are mostly non-tribal members. Under the Violence Against Women Act (VAWA), tribal courts can issue protection orders against non-natives. Furthermore, state and local governments must give the orders “full faith and credit,” meaning that they will enforce them.

Many police officers are not familiar with this requirement and do not enforce tribal courts’ protection orders. This leaves Native Americans vulnerable. It also leaves police departments open to prosecution for failing to follow VAWA.

In the last legislative session, Oregon codified ICWA requirements into state statutes with broad support. OJD and tribal courts will continue to participate in efforts to improve the legislation and educate about the requirements of Oregon ICWA. In the long term, OJD and the tribal courts hope to continue to educate about the importance of full faith and credit of tribal orders and judgments in addition to looking at other possibilities to ensure enforcement of tribal orders and judgements such as possible legislation on full faith and credit.

But as OJD’s Access to Justice Counsel, Valerie Colas, puts it, the most important aspect of the Tribal Court State Court Forum is “the sense that state courts and tribal courts share a jurisdiction," because that "makes it so that both function well for both Oregonians and tribal members.” Tribal Judges and State Court Judges know each other – they have a contact to call when they have questions, and they can help each other solve problems. The Tribal Court State Court Forum creates a “place to connect.”

--Many thanks to Valerie Colas for her invaluable help in writing and researching this piece.

You can find more resources by searching our catalog or emailing us!