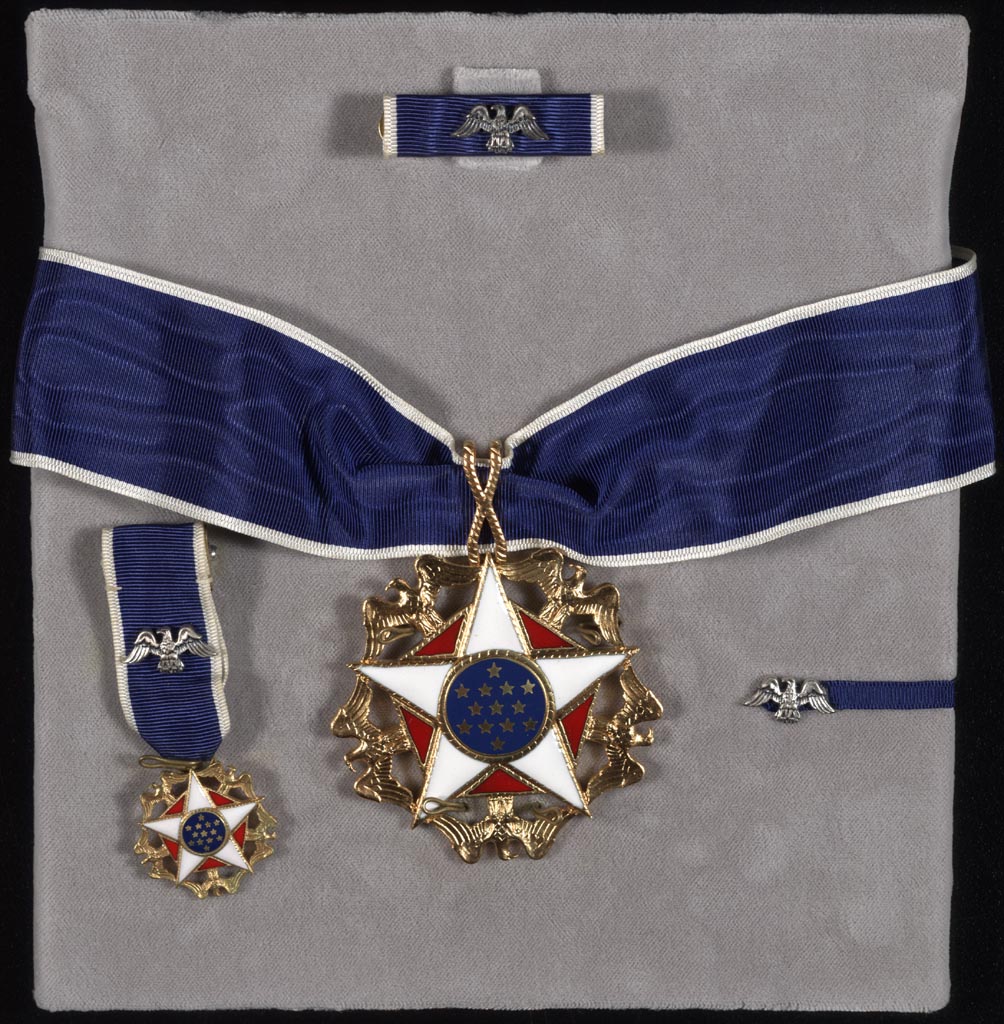 ﻿Yasui's efforts earned him the Presidential Medal of Freedom. Wikipedia Commons.
On June 21, 1943 – 77 years ago this Sunday – the United States Supreme Court determined that the government could discriminate against Japanese Americans based on their ancestry during World War II. Defendant Minoru Yasui, an Oregon lawyer, felt frustrated. He had broken the curfew imposed on Japanese Americans to challenge such discrimination, expecting the court to overrule it.
Discrimination against Japanese immigrants and U.S. citizens was not new. In 1922, the United States Supreme Court held that Asian immigrants could not become citizens. The Oregon Alien Business Restrictions law let local governments deny various licenses (liquor, pool, etc.) to non-citizens, and forced groceries and hotels owned by non-citizens to post the owners’ nationality.[1] At the same time, whites frustrated by Japanese immigrant competition in farming pushed an alien land bill. Passed in 1923 with the support of the Ku Klux Klan, the Alien Property Act allowed "all aliens eligible to citizenship under the laws of the United States" to buy or lease property.[2] This shut out Japanese and Chinese immigrants who could not become citizens.
Yasui's parents, Masuo and Shidzuyo, were Japanese immigrants. Masuo, like many Japanese Americans, came to the United States in the early 1900s to work for the railroad companies. He also worked in an American lawyer’s household, reading law books to improve his English. The books sparked his interest in law, but he couldn’t join the bar as a non-citizen.[3] So instead, he opened a general store with his brother, among other business ventures. He became a community leader in Hood River’s Japanese community. Much of Masuo’s passion for law and community leadership passed to his son.
Minoru "Min" Yasui was born in 1916. He studied at an Oregon Japanese Language School and received his undergraduate degree from the University of Oregon. He joined the Army’s Infantry Reserve as a second lieutenant. In 1939, he graduated from the University of Oregon's law school in 1939 -- the school's first Japanese American graduate. He was also the first Japanese American to join the Oregon State Bar. But after completing law school, he struggled to find employment in Oregon, eventually moving to Chicago to work for the Japanese Consulate.
The Japanese attack on Pearl Harbor tore the Yasui family apart. Immediately after the attack, Masuo sent his son a telegram, telling him to join the army. Yasui resigned from the Consulate and went to Fort Vancouver to report for duty. The army refused him. Over the course of the war, they refused him nine times. Yasui returned to Oregon. Around the same time, the FBI arrested his father, because they felt he was a danger to the United States. Yasui unsuccessfully tried to help his father but to no avail.  In January 1942, Yasui opened a law firm in Portland to help Japanese Americans with legal problems resulting from the war.
For Oregon’s Japanese community, the war posed immediate problems. Many first-generation immigrations, like Masuo, were technically Japanese and legally could not become U.S. citizens. Renouncing their Japanese citizenship meant they would have no nationality at all. Nor could they leave their homes in the U.S., because their work and children were here. Fearful the government would accuse them of disloyalty, they bought war bonds and signed pledges of loyalty. In February 1942, President Roosevelt signed Executive Order 9066. Under the order, the military could establish curfews -- and later internment camps -- for Japanese immigrants and Japanese Americans.
Shortly after the curfew went into effect in Portland, Yasui broke it. Convinced that the curfew was unconstitutional, he determined a test case was needed – a case that the courts could rule on and, thus, strike down the curfew. To that end, he set out from his law office in the late evening of March 28, 1942. He helpfully directed his legal assistant to call the police. Wandering downtown Portland, he met a police officer who told him to “Run along home, sonny boy.” Eventually, Yasui went to the police station, where “I [Yasui] argued myself into jail.”[4] 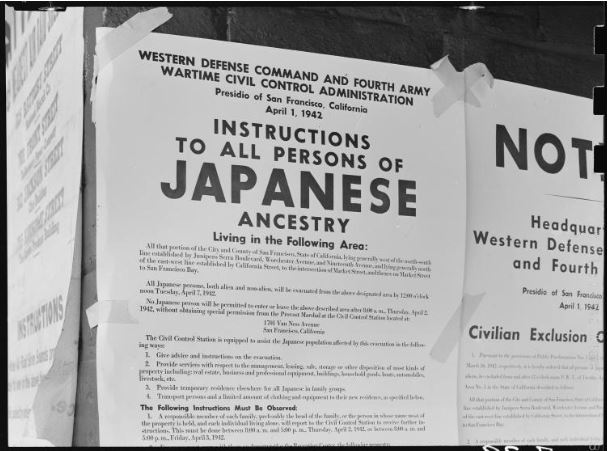 Forced evacuation notice in San Francisco. Courtesy of the National Archives
In May 1942, while Yasui was out on bail and awaiting trial, the military ordered the “evacuation” of Portland's Japanese Americans to internment camps. Yasui informed them that he would not follow the “unconstitutional, illegal and unenforceable” order. He told them he was leaving for Hood River, and the military took him to Portland.
Eventually, Oregon’s federal district court ruled on Yasui’s curfew breaking. The judge agreed that the order was unconstitutional for American citizens, but determined that Yasui was not a citizen. The ruling stated that Yasui's actions -- such as working for the Japanese Consulate -- forfeited his U.S. citizenship. Therefore, the judge determined, the curfew was legal and Yasui was guilty. Delighted and frustrated at once, Yasui thanked the judge for upholding the Constitution and appealed the case.[4]
The Ninth Circuit Court of Appeals sent Yasui’s case to the United States Supreme Court. The US Supreme Court ruled that the curfew was constitutional. For Yasui, the one consolation was that the court restored his citizenship. Shortly thereafter, the government sent him to the Minidoka Relocation Camp in Idaho. 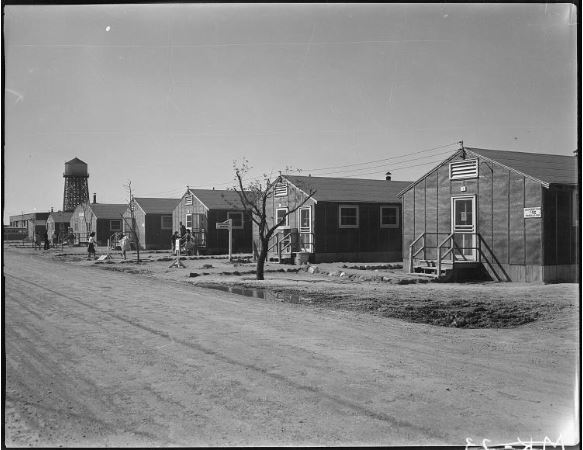 Minidoka Relocation Center. Courtesy of the National Archives.
After the war ended, Yasui moved to Denver, Colorado. His sister and much of his extended family had moved there, and Hood River had not welcomed its Japanese community back. Those who returned faced severe discrimination. As one resident put it, “The town rejected us…. We were caught in the fear that somebody might come to attack us, and we jumped even at the creaking of a door or at mice running on the ceiling at night.”[1]
In Denver, Yasui turned his attention to civil rights issues. He founded a chapter of the Japanese American Citizens League. He campaigned for redress for Japanese Americans sent to concentration camps and citizenship for Japanese immigrants.[4] He helped Japanese Americans facing immigration and citizenship legal problems, and charged them for only what they could give (including a live turkey).
His conviction continued to haunt him. The Colorado State Bar refused him because of his conviction, forcing him to appeal to the Colorado Supreme Court. He won and joined the bar. In 1983, he began pursuing legal redress for his trial and conviction. The federal courts never agreed that the order was unconstitutional. Nonetheless, after more than forty years, the courts vacated his conviction.
Near the end of his life, Yasui stated:

“[W]hen you subjugate, when you suppress or oppress any group of people, you are really derogating the rights of all people because if you can do it to the least of us then you can indeed do it to all of us … If there is suffering or pain that is unfairly imposed upon anyone, it's my duty, it’s your duty to try to alleviate it because that's the way in which we gain a better life for all of us.”

He practiced what he preached. In Denver, he helped found numerous groups to protect civil rights including the Urban League of Denver (African American), the Latin American Research and Service Agency, and the Denver Native Americans United. He participated in a virtually endless number of organizations: interfaith groups, ex-offender programs, a women voter league, students groups, etc.[4] His work earned him a place on the Denver Community Relations Commission, where he created multiple commissions “including the Commissions on Youth, Aging, Human Services, the Council on Disabled, and the Office of Citizen Response.” Ultimately, President Obama posthumously awarded him the Presidential Medal of Freedom – the highest honor available to a civilian.
Works Cited:
[1] https://www.jstor.org/stable/20614543
[2] https://o90009.eos-intl.net/O90009/OPAC/Details/Record.aspx?BibCode=15337570
[3] https://www.jstor.org/stable/20614513
[4] https://scholarsbank.uoregon.edu/xmlui/handle/1794/22970
Add a Comment