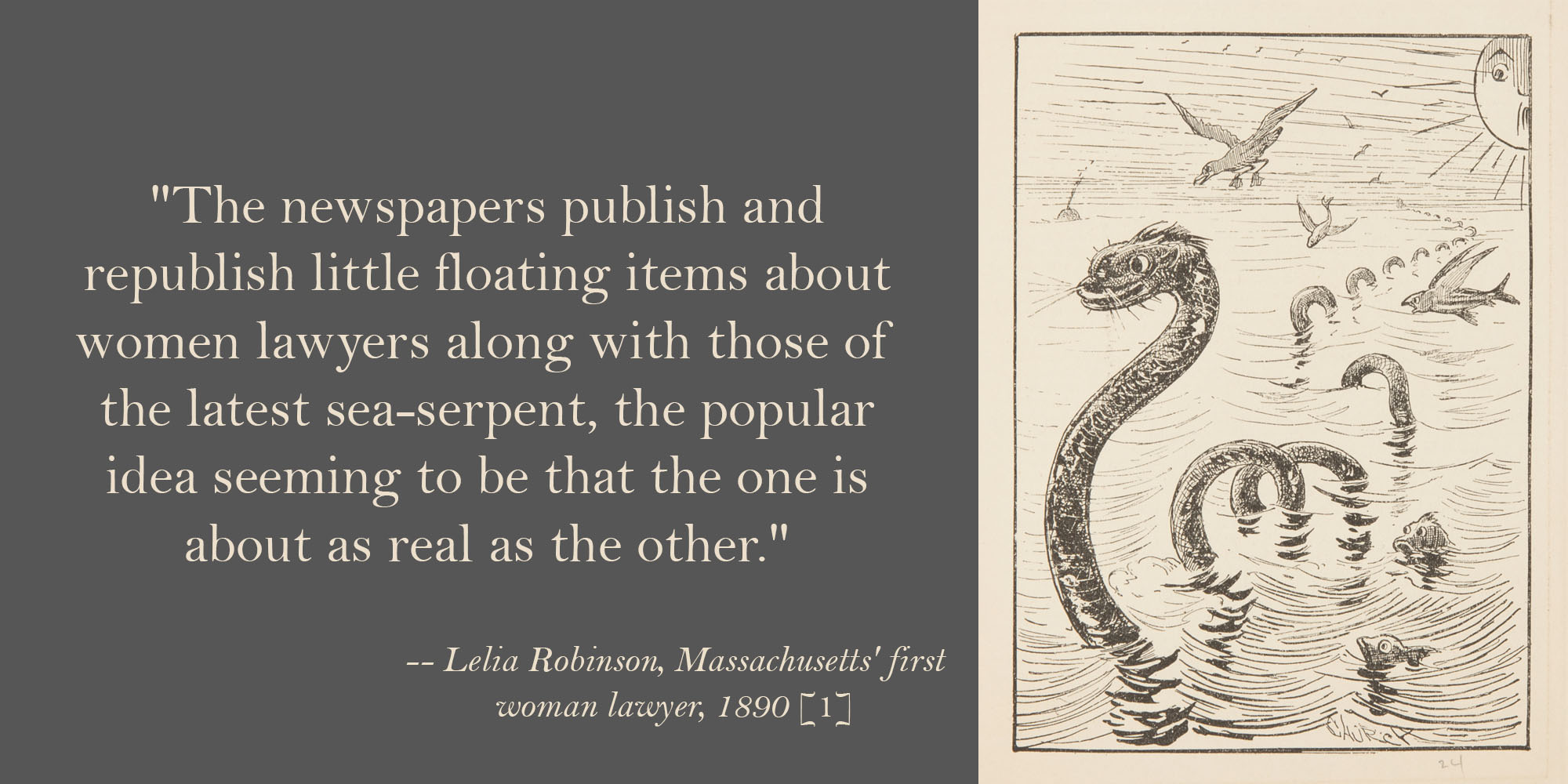 Mary Leonard was the first woman lawyer in Oregon and in the Washington Territory. Furthermore, she did so as a Swiss immigrant and at a time when women lawyers were considered outlandish.

For Leonard, like other women in the 1800s, "gaining the right to practice was a trial, often literally." [2]

At first, Leonard met with success. After studying law in Portland, she persuaded J.C. Haines of Struve, Haines, and McMicken in Seattle to teach her law -- an impressive feat since most women learned from a male family member.[3] In 1885, she passed the Washington Bar, becoming the first woman lawyer in the Washington Territory.[4] On March 27, 1885, Leonard joined the Federal Bar under the Federal Act of 1879.[5] Under the act, women could practice law before the United States Supreme Court.[6]

Admission to the Oregon bar proved difficult. The Oregon Supreme Court denied Leonard’s application, stating that, “this is the first application of the kind in this state that the court has any cognizance of, and it is very generally understood that women are disqualified from holding such positions.” The court went on to say that until the legislative assembly passed a bill granting women the right to practice law, it could not admit Leonard to the bar.[7]

Within the year, Leonard began advocating for women's right to practice law. Senator J.M. Siglin of Coos and Curry counties brought a bill allowing women to practice before the Oregon legislature. It passed.[5]

Leonard's determination to be heard and her defiance of expectations appeared long before her law career. After migrating to Portland, Oregon in her 20s, Leonard married Daniel Leonard in 1875.[8][9]

The marriage proved intolerable -- according to Leonard, Daniel was abusive. Daniel claimed Leonard was a thief, adulteress, and abuser.[10] The two decided to divorce in 1877. While the case proceeded, the judge ordered Daniel to pay for Leonard’s support. But Daniel refused, driving Leonard to write him a furious letter.[8] 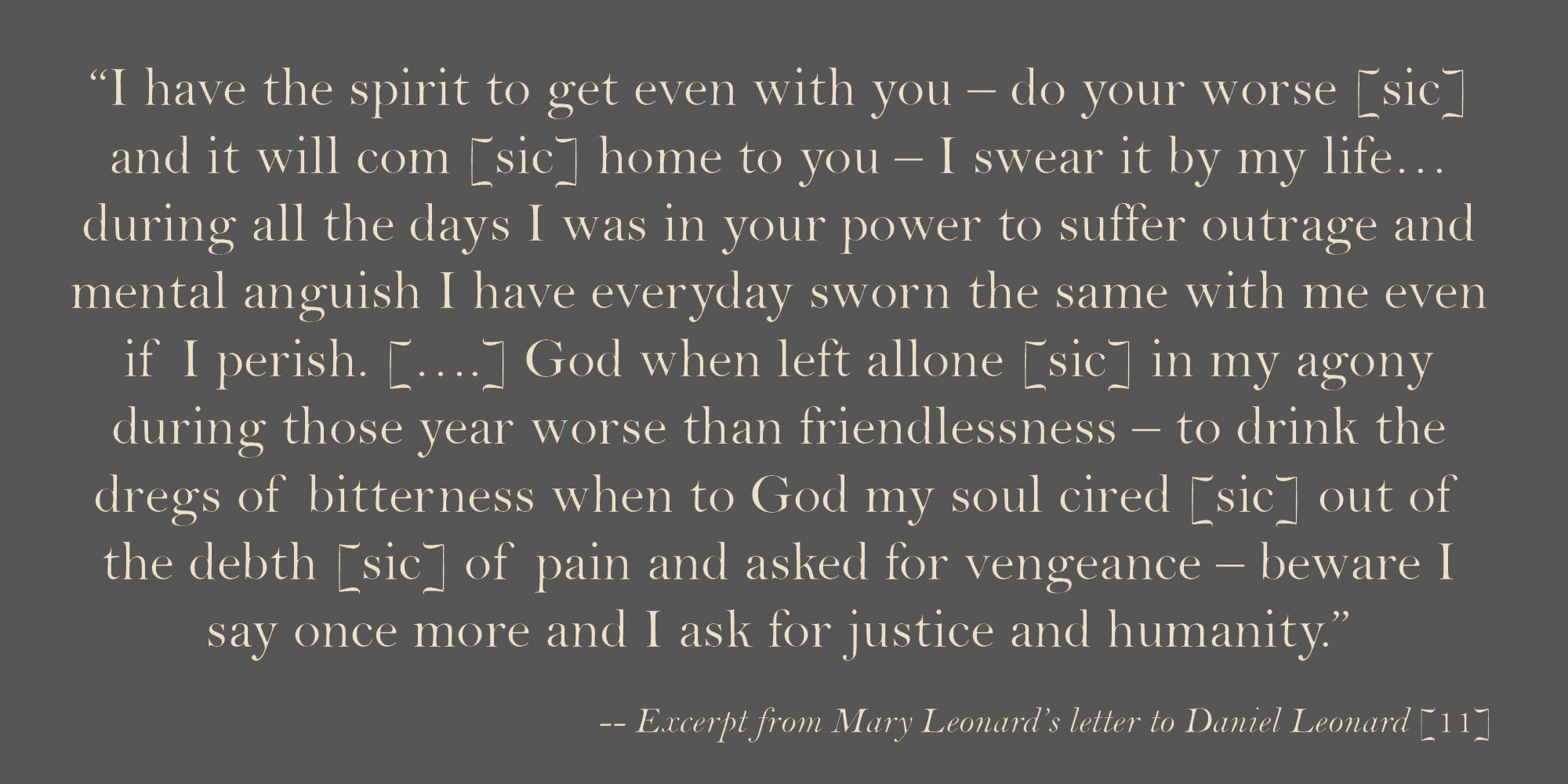 Before the divorce was finalized, someone shot Daniel. Although he lived almost two weeks afterward, he never told anyone who shot him. Daniel’s attorney accused Leonard and her suspected lover.[5]

Leonard remained in jail for almost a year awaiting trial.[4] After 11 months, the District Attorney further delayed the trial, prompting a scathing newspaper article from Abigail Scott Duniway.: "This woman has been in jail since last February awaiting her trial on evidence purely circumstantial, for the murder of her husband [...] while one man at least under lik- [sic] indictment has been allowed liberty preceding his trial and a quick decision in his favor."[12] Shortly afterward, Leonard's trial began.[13]

The jury pronounced Leonard innocent at the trial. The evidence was mostly circumstantial.[14] Leonard had an excellent lawyer.[5] Furthermore, the community disliked Daniel.[4]

Despite Leonard's acquittal, the trial followed her throughout her career -- appearing in news articles and even generating an urban legend of sorts.[15] The legend claims that Leonard had been kidnapped from Italy at age 16, abused by the captain, and then accused when he was murdered![16]

As Leonard began her legal practice nearly a decade later, she likely remembered her own experiences with her husband the law and advertised free help for women in the New Northwest. Despite her interest, she worked almost entirely in the police courts.[17]

Her legal career was often detailed in the news when scandal or drama was involved. Over the course of one case, Leonard encouraged perjury, embezzled money from her client’s mother, and then declined to pay the fine for embezzlement.[14] The judge jailed her, but Leonard was not cowed. After being released, Leonard stated, “I think my release on a writ of habeas corpus saved my life and maybe [the judge’s life].”[18]

Another time, a landlord attempted to evict Leonard. Leonard did not take this well, and she returned to the premises with a “toy pistol." At her trial for threatening the landlord, Leonard testified about not only the case at hand, but also about a variety of unrelated grudges. According to the Morning Oregonian, when Leonard’s lawyers interrupted her testimony, she would continue her story, but “a little further back than where she left off.” In the end, the judge ordered Leonard to pay a $100 peace bond.[19]

Around 1906, she took on a case representing an alcoholic man – Anthony G. Ryan. Mary worked on the case for years, but she lost. Within a year of losing the case, Leonard died at the Multnomah County Hospital on October 11, 1912.[14]

As one researcher puts it, "while it is clear that she [Leonard] became somewhat irrational and incompetent as an attorney near the end, during most of her final years, she merely acted as a zealous advocate, a role some historians seem to have difficulty imagining a woman performing well."[20] Leonard was not the only stubborn lawyer -- during the same period, a Multnomah Circuit Court judge's antics earned him public admiration.[21][22] The same defiance that brought her legal trouble, also made it possible for her to become a lawyer in the first place.

Paving the Way for Change

Women lawyers were a small, but close community. Publications from as far away as Massachusetts, Michigan, and Illinois mention Leonard alongside other women lawyers. Like Leonard, many of these women struggled to enter the bar. They argued for their right to practice before state and federal courts. If that failed, like Leonard, they pushed to change their states’ laws so that women could practice.[23]

Leonard had the courage to tell the world that she was real. She demanded that those around her hear her voice and listen. Learn more about women lawyers this Women's History Month, with a peek at our collection highlights.

[22] "Judge Henry E. McGinn, Who is a Believer in Justice and Foe of Red Tape and Precedent, Quits Circuit Bench," The Sunday Oregonian, December 31, 1916, 8, University of Oregon, Historic Oregon Newspapers.